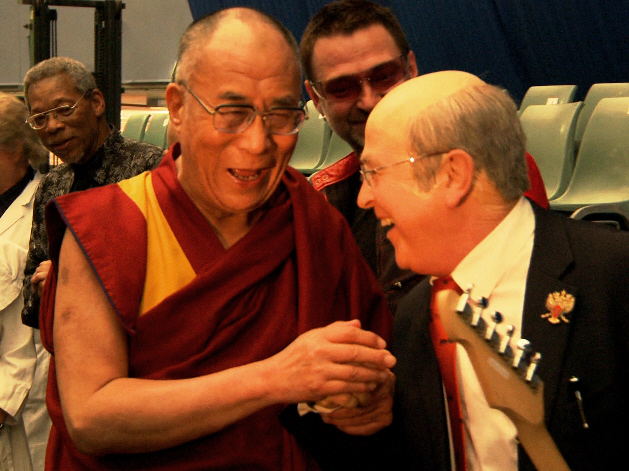 Our Baby Boomer ‘leading man Kev’ spent 3 hours in makeup to double as Mikhail Gorbachev, former leader of the USSR now reborn as guitarist for the ‘Nobel Funk Off’ Peace Band!
Unable to resist the urge, our Baby Boomer tried out his best Russian and judging by the reaction from the Dalai Lama, the joke hit the funny bone. (Yes, that’s the real Dalai in this pic.)
The band is a crazy collection of singers, musicians and actors; who all look like Nobel Laureates or similar peace advocates. There’s even a second ‘Dalai’ on bass.
Each has a character, background and a sense of humour. The real Dalai got a real kick out of the lineup.
With a series of successful videos passing 10 million hits on You Tube, the band entertained the crowd at Perth Superdome then met the Dalai Lama backstage.
The spiritual leader signed our Baby Boomer’s guitar, which he proudly plays in the show. As one Baby Boomer quipped, “Now you have a blessing they can’t call it the ‘devil’s music’ anymore!”
Click here to see a video of the Dalai meeting and signing our Baby Boomer’s guitar.
Click here to a video of some of the gig!    You can check out all the videos that have now passed 10 million views on You Tube by clicking on this wesite: http://thenobelfunkoff.tv/
Here’s a few more snaps… 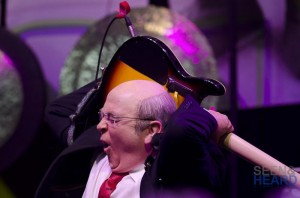 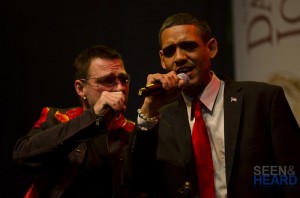 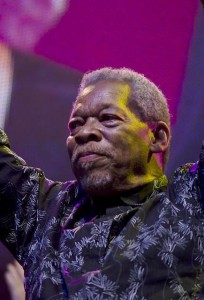 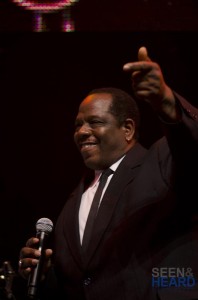 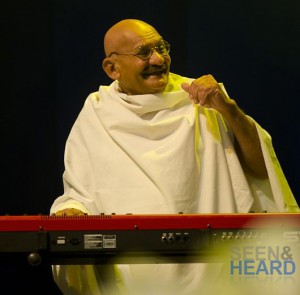 January 6 through to March 31
Corporate Events, Cruise & Private Only.