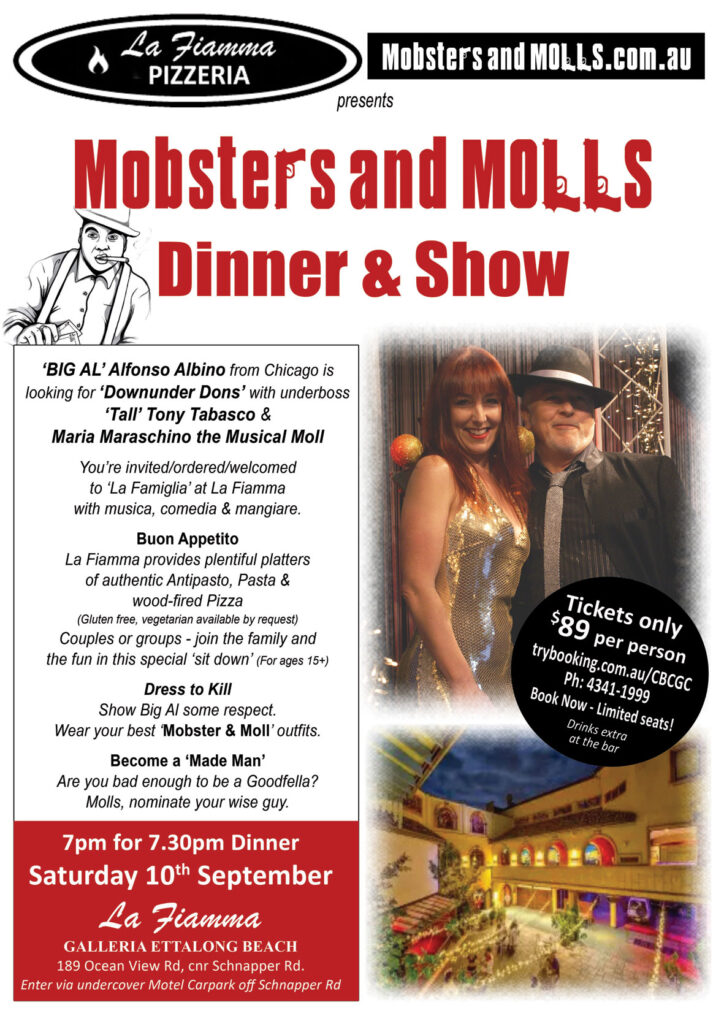 We in da famiglia are havin’ a ‘sit down’, which means stuff’s gotta get sorted out.

Big Al figured some rat was trying to put him behind bars, which is stoopid ‘cause we own most the bars in every city.  Anyways, after da dubious disappearance of Dons from Detroit, Dallas, Denver and Delaware, – Downunder seemed the best place to get more dudes.

If you wanna great reason to dress up, appreciate the subtle nuances of Napolitano genuine cuisine, wanna night off cookin’, wanna night off washin’ up after the family’s eaten ya outta house and home, – and can slap that schmuck wid ya into shape so he puts on proper wise-guy ‘garb’ instead of lookin’ like ‘garb-age’, you might just get him a big promotion; and get yourself a lotta luxury, fancy apartment, house cleaner, gardener, bada bing – bada boom.

Da least you gonna get is the best fun night out ever.

Dario (da chef) might even divulge his secret sauce. His food is ‘to die for’, but we suspect he’ll just tell us instead.

If you got potential to be a wise-guy, we’re lookin’ to ‘induct’ into da family.

Maybe ya always wanted to wear pin stripes, a shoulder holster, or just get a piece of the action. (Ability to work rackets and/or numbers an advantage.)

On the night we also have opportunities for those who volunteer to show us their skills, including:

Al’s come a long way to taste authentic Italian food ‘cause he respects the reputation of the real chef from Napoli. You show respect and bring a apetite. The restaurant is called La Fiamma, which in English means the ‘Flame’.

Maybe you can use La Fiamma to fire up a flame wid dat gorgeous Gia, Gina, or Gabriella who’s with you.

So book early and arrive on time.

We know where ya live.